Bats are a protected species in the UK and so if you suspect that you have bats in your roof, it is essential that you take the necessary precautions before commencing construction work of any form, such as simple roof repairs.

Originally, bats would roost in wooded areas and caves, however, as these have become more scarce, species have adapted to roost in homes, old and new, hibernating throughout the winter. 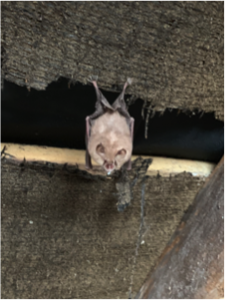 These virtually harmless animals can go largely unnoticed as their droppings tend to be odour free and dissolve quickly and they wont bring dead prey inside their roosts (unlike our feline friends!). Your wooden rafters and insulation will be kept in tact and females only give birth once a year, meaning that an infestation is not on the cards.

We suggest that if you suspect you have bats living in your roof, you should contact a local conservation agency before starting any construction work. Additionally, it should be noted that the handling of bats and the disturbing of their roosts is forbidden and can be seen as breaking the law, however as well respected and experienced roofers, we are able to work around these magnificent creatures with advice from local agencies in order to produce some fantastic results. 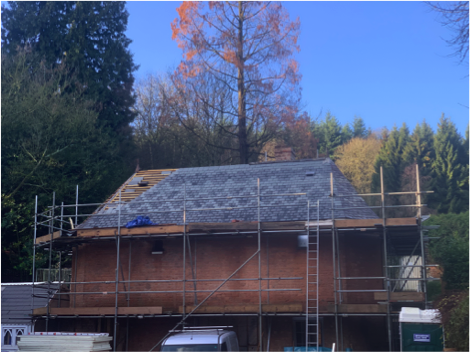 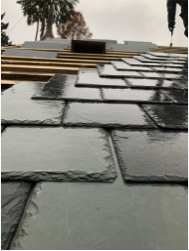 Below are some pictures of a detailed slate roof on a late 2018 project on a country manor’s coach house in Gloucestershire. Here, we worked around the bats to produce a result that we are exceptionally proud of. The architect specified that the work carried out matched the original build to the finest detail. The aim of this project was to restore the roof to its former glory whilst retaining the loft space as one of the most important maternity roosts for the Lesser Horse Shoe bat in the UK with the help of licensed bat workers. 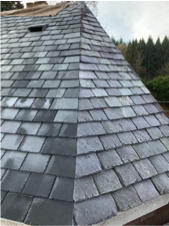 We also matched the original mitered hips using a hidden gutter to drain away any rainwater.The hip ends were formed out of the original slate that we were salvage whilst stripping the old roof. 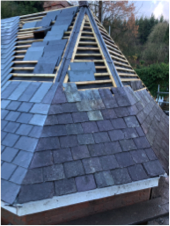 The two large front and rear faces were reinstated with newly sourced slates, which were matched as closely as possible to the original. 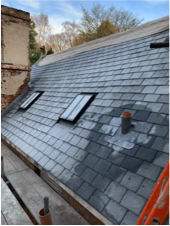 In order to make the roof as authentic as possible, we replicated the original diamond pattern with the two contrasting slates. Another part of the restoration, through following advice from the licenses bat experts, we were able to reinstall the original hoppers with new lead so that bats use could use them to travel in and out of the loft. The original lead finials (details at each end of the ridge) were similarly restored and reused to keep the character and heritage of the building alive. All new lead (soakers and back gutters) was fitted to the chimneys. Two conservation roof lights were added to the rear face to increase the amount of natural light inside. Old 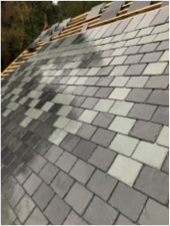 slater’s under felt was used as opposed to a more modern breather membrane; this is for the benefit of the bats as they can hang from the old felt with no trouble. It’s said that more modern felt is manufactured differently so that when the bats hang on it they actually get caught up in the fibers and they cannot escape once caught.

As of spring 2019, the bats have been returning to the roost and they now have a safe space to thrive for the foreseeable future. Only recognized bat professionals came into contact with and handled the bats in the roof. See our gallery for more pictures .