Taking a weekend off roofing duties; myself, Louis, Jack, Laurence and Jordi embarked on a national challenge climbing the 3 highest peaks of Scotland, England and Wales, something we quickly realised was no easy feat.

The aim of this challenge was to raise money for the charity Scotty’s Little Soldiers, a charity that supports children that have lost a family member in battle. We successfully met target our target of £400 three days before setting off, meaning our goal turned to raising enough money as we could (as well as getting home in time for work on Monday!).

Was I prepared for this challenge? No. Would I do it again? Probs not, I like my sleep. Was it worth it? Absolutely.

4:30 AM start and a 8 hour drive to Ben Nevis was a bit of a shock to the system, and it wasn’t long until we encountered our first hurdle, 3 hours of M6 carpark traffic. 11 hours later we arrived, ready and rearing (if not slightly full from too many food stops) to start our climb.

The weather was kind to us at first, providing us with a great opportunity to get going across the shallow creek fields that led to the mountain path. An hour and a half later we reached the valley crossing and felt great! The endorphins of this little evening uphill walk were really hitting, and the fear of exhaustion we’d feel at the end of the trip had disappeared, replaced instead with a great sense of pride at the progress we’d already made. The stunning greenery came to an end here and as did our misguided optimism. Greenery was replaced with stony paths surrounded either side by rocks paved the way for the rest of the ascent. This was followed by a helpful passerby claiming that we weren’t even half way up yet, great. The 4 am start had begun to hit us and the mental exhaustion began to set in already.

After a short break to kick us out of our slump, we continued our climb with the assumption that once we reach the top it will be the confidence boost we need to complete the rest of the challenge. Every corner turned we felt (or rather hoped in my case) that we were close to the top, however each corner simply presented us with a greater slope to climb…until finally we saw it, the brow of the seemingly never-ending hill. Or so we thought. It turns out our excitement at reaching the top of the mountain was stalled as we failed to see the further stretch that would take us another 45 minutes to navigate. The barren and rocky peak was a much welcomed sight, providing us with some spectacular views of the Scottish highland. I may have spent years travelling across various parts world but weirdly, had never been to Scotland so this provided me with a great opportunity to tick Scottish sightseeing off the list…from 1345metres.

Somewhat unsurprisingly, the descent was a down sight faster than the climb and we caught up on precious time that was used up trying to get that perfect summit picture for our instagrams. We arrived back at the car to wake up our sleeping driver Jordi and set off for Scafell Pike. 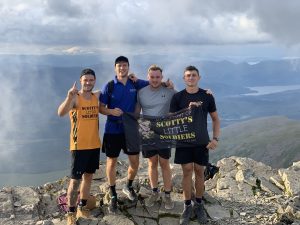 It really does pay taking a driver with you, thanks to our speedy driver Jordi we managed to arrive at the Lake District in just over 5 hours. It was on the drive that we encountered our next hurdle: sleep. We had planned to use this drive to get some much needed shut eye to keep us going for the climb ahead, however that is easier said than done and only one of us actually managed a sustainable level of sleep.

A 3am start this time with waterproofs on and torches out and we were ready to go. Although

the smallest of the 3 peaks, we had been told enough times that this was the hardest climb of the lot and our sleep deprived bodies were not filled with heaps of confidence. We marched on in the dark regardless. Unable to see more than a few metres in front of us we took it, quite literally, one step at a time. With a steeper and rockier terrain than Ben Nevis, coupled with a fresh spray of rain, the path was slippy underfoot, meaning that more precious time was added on to this climb. An hour and a half later, the sun began to rise and we were able to truly appreciate the beauty that this mountain and its surrounding landscape had to offer. Surrounded by the magnificent rolling hills of the Lake District, the mountain path ran through a valley, providing us with an amazing view of England’s deepest lake, Wast water. From here we were able to catch a glimpse of the top of the mountain, mostly hidden by a thick blanket of cloud.

We were informed by a helpful passerby this time that the peak was ‘not far away’ and trust me, after plugging on for all this time, there was nothing else we needed to hear. The mountain fast became more technical, with a steeper and more shallow incline into the clouds and we were shortly greeted with the best view of them all: the summit (an excuse to sit down and have a biscuit, or a whole bar of Cadburys…). Signalling we had reached half way through the challenge, there was no better feeling than realising we were an hour ahead of schedule. After a short break and taking time to take those all important summit group shots, we headed downhill.

The descent may not have been filled with the same degree of optimism as we displayed previously as knee pains and blisters were starting to take their toll. We returned to find a sleeping Jordi (again) ready for our drive to the final leg of the challenge. 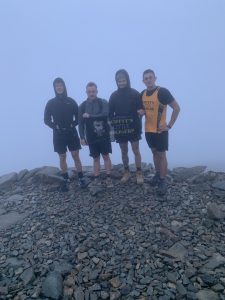 Time: 3.75 hours
Metres Climbed: 970
Mood: Tired but happy with the second peak time
Blisters: 11
Red Bulls consumed: 2 (according to Jordi but we saw about 6 empty cans)

After an unforgiving 4 hour drive to Snowdon, we arrived at the final leg of the challenge, again with next to no sleep. In fact it would be greatly generous to say that and Louis I managed even an hour of sleep, blaming poor choice of car seats as the culprit (and not the copious amounts of caffeine consumed…).

Blisters plastered, boots on and waterproofed up, at 12:15 we attempted to put sleep on the back burner and set off for one last climb. Plagued with heavy showers and a miserable outlook, our grey moods were reflected in the weather.

The climb began with a series of rocky steps, requiring us to utilise our somewhat limited

climbing abilities. The terrain then began to even out and a low incline path up the mountain came to view, with lakes on the left and the mountain on the right, we thought we were in for an easy ride. Sadly, this brief moment of relief was short lived as the steps soon returned.

Within the first minute we were greeted with the sight of a mountain rescue helicopter circling the area and then subsequently airlifting a poor victim to hospital, filling us with an immediate sense of dread. We promptly discovered that the injury wasn’t too serious, but it was still a reminder of the potential of danger. Our pace was slowed further thanks to the bottleneck of climbers that now appeared, creating a queue to the top as the path was only broad enough for single direction traffic.

The final 40 minutes of the climb up snowdon were by far the hardest of the entire challenge as weather conditions grew harsher, we were certainly not prepared for this. We opted for the fastest but perhaps the most technical route and put our heads down to complete the challenge on time. The sound of a train gliding over tracks up ahead signalled that the peak was near, after a few more (very painful) steps walking alongside the track, we reached our final great peak. Whilst we all wanted to celebrate, the wind had other ideas and so we took one last brief summit picture and headed back down before our time ran out.

With Lawrence hardly able to bend his leg, the phrase two steps forward, one step back came to mind as he completed the majority of the descent walking backwards. This, combined with the vast numbers of people slowed us down significantly, making the prospect of getting home in 22.5 hours become more of a vague dream than a reality. However the entertaining sight of Lawrence attempting to navigate the mountain backwards sparked enough morale in Jack, Louis and I to carry on down in relatively high spirits and as a team completed the challenge in 23 hours, 32 minutes.

Reliable as ever, Jordi was waiting at the bottom, red bull in hand, to congratulate us. A special mention needs to go to our driver, whilst not taking part in the climb itself, he had an equally challenging task, driving us round the UK in 24 hours and staying awake for the best part of it. It may not have been the wildest of road trips (if you know me after bad weather and no sleep, you know) but we certainly couldn’t have done it without him. The final car journey journey was filled with a great deal of relief however that was momentarily overshadowed by the moans and groans of cramps coming from the back. This was nothing a little trip to KFC couldn’t fix though and we arrived back at Andy Lee’s yard, 40 hours and 1200 miles of driving later.

Time: 4.5 hours
Metres Climbed: 1085
Mood: A mixture of exhausted and elated but tbh more focussed on our highly anticipated KFC
Blisters: 22
Red Bulls consumed: No full cans left but I’m sure Jordi bought 10 with him (he claims they help him sleep)

Needless to say, my legs couldn’t make it to work on Monday.

As one of the most mentally and physically exhausting challenges I have ever put myself through, the amount of money raised made everything worth it, so we would all like to say 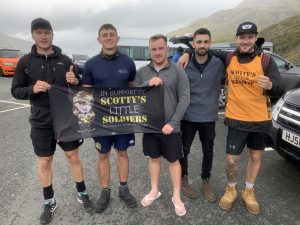 a massive thank you to all those who donated, so far we have managed to raise over £900! A massive thanks goes to Andy Lee Transport for the generous donation of fuel money and a car to complete the journey, without which we would have struggled greatly.